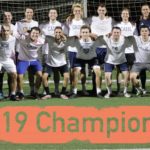 Team Guindon (White) takes home the 2019 CASL championship with a 4-0 win over Team Caruolo (Green)! DerSimonian opened the scoring in the 5th minute with a shot (cross?) that found the upper corner of the net. Green battled and put together dominant stretches of play in the first half but were unable to score. After half time it was all White, Sullivan scored on a thunderous header off of a corner and minutes later Severini beat the wall on a set piece to make the score 3-0. Green mounted several good scoring opportunities, forcing white’s keeper, Noel, to make a hand full of spectacular saves. Lonner sealed the game with a bending shot that found the corner to put team Guindon up 4-0. The championship game MVP went to Sullivan!