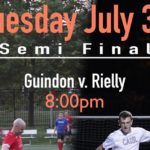 The 2nd game in the playoff double header was between #1 seed team Guindon (White) and #4 team Reilly (red). White was gifted an own goal in the first 5 minutes and used the momentum to high pressure team Reilly. Severini tapped in a rebound and Stein slotted a ball into the back corner to put team Guindon up 3-0, just 20 minutes into the match. Despite battling the injury bug, Red settled in to play some good soccer and created several chances but were unable to convert. Just before half, Severini again found the back of the net to push the score to 4-0. The 2nd half saw White continue their strong play, getting goals from Garrido, Pehlivanov and DerSimonian to seal the game, setting up a championship matchup between #1 seed team Guindon and #2 seed team Caruolo on Thursday night!